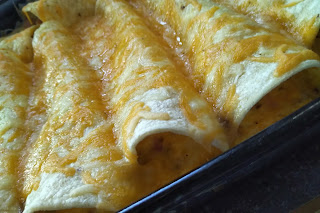 I used to love breakfast burritos. I'm sure you have also discovered they aren't as portable as a gluten free product. They tend to crumble, not roll up, etc. I found a recipe and of course had to adapt it to my own tastes. I wasn't a fan of their seasonings. This is what I have come up with. It is so easy and yummy. They even look sort of fancy so you could serve them to company. However this is not rocket science, use more cheese if you would like. Use bacon or sausage instead of ham. You get the idea...make it your own.

Sprinkle cooked ham and onions evenly down the center of each tortilla (or at least try to). Top each with 2 tablespoons shredded cheese. Roll up tortillas and place, seam sides down, in a lightly greased 9 x 9 in. baking dish.
Whisk together eggs, pepper and paprika. Pour mixture evenly over tortillas.
Cover and chill at least eight hours. Remove from refrigerator, and let stand 30 minutes at room temperature before baking.
Cover the baking dish in foil and bake at 350°F for 20 minutes; uncover and bake 15 minutes. Sprinkle remaining cheese over top and bake three to four more minutes, or until cheese melts. Let it cool for 10 minutes before serving. 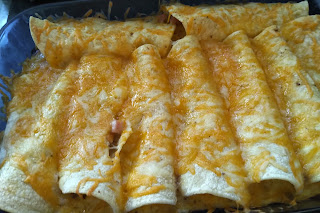 Posted by USASillyYaks at 9:23 AM No comments: 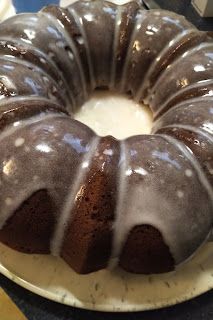 Posted by USASillyYaks at 7:07 PM No comments:

Back in my gluten filled days before my diagnosis I loved a certain 2 patty cheeseburger, sesame seed bun, with lettuce and secret sauce from a chain fast food restaurant. Obviously, that isn't an option anymore.......so sometimes I whip up my own sauce. 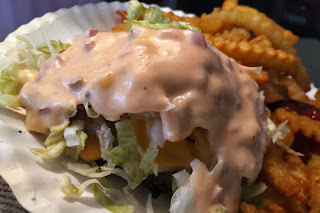 Combine all the ingredients in a small bowl. Cover and refrigerate for several hours. The longer it sits the more the flavors become friends and become amazing.

Posted by USASillyYaks at 7:46 PM No comments:

I didn't receive my Celiac diagnosis until college. That means I had a lifetime of eating yummy gluteny foods. One thing I miss is Hostess Zingers. They are little twinkie like snack cakes with a pink raspberry and coconut outside. I haven't found a replacement for those....until today! Let me introduce you to gluten free Raspberry Zinger Poke Cake! 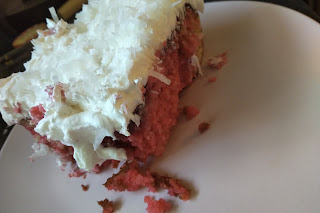 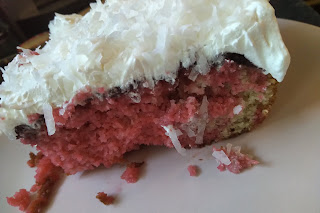 Posted by USASillyYaks at 6:58 PM No comments:

This cake is heavenly........and so super easy!! I may have eaten dessert before supper...shhhh! 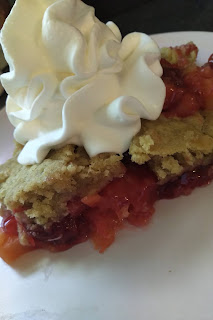 Strawberry Pineapple Dump Cake
3/4 cup butter, melted
1 (20-ounce) can crushed pineapple, in juice
1 (20-ounce) can strawberry pie filling
1 Gluten Free box yellow cake mix
1/4 C. chopped pecans
Pre heat the oven to 350 degrees. Spray a 9x13 pan with cooking spray. Pour the pineapple with the juice into the bottom of the pan. Spread it out evenly. Spread the strawberry pie filling over the crushed pineapple. Pour the cake mix over the top. Spread it out evenly. Sprinkle the pecans over the cake mix. Pour the melted butter over the top of the entire mixture (don't stir) Bake for 30-45 min. or until lightly browned and bubbly. 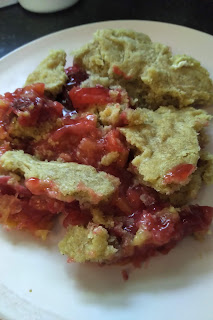 Posted by USASillyYaks at 6:13 PM No comments: 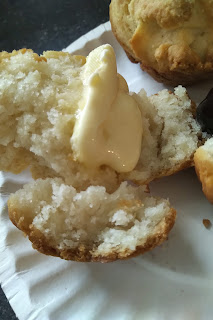 We are in an odd time in our world right now with the Corona/Covid-19 virus. Grocery store shelves are near empty or empty. I saw this recipe going around on Facebook and thought I would give it a try with gluten free flour. It was meant for regular gluten filled flour. 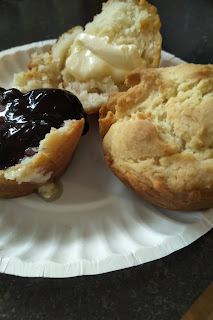 In using the gluten free flour my product turned out more biscuit like and needed a longer baking time (so I have added that on my recipe for you). They were flaky, not fluffy like a dinner roll. However, still very good. Just don't expect the light fluffy roll texture..... I can't wait to use one for a breakfast sandwich in the morning. 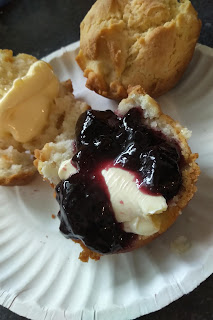 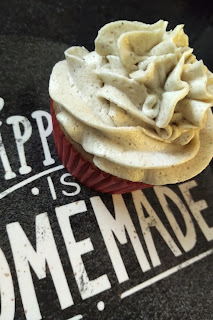 I had run across a recipe for these cuppeycakes on Facebook. I knew I had to make them. Of course I can't just follow a recipe, I have to put my own spin on it. This is MY version of the recipe I ran across. They are GOOD!! Like.....I may of had 2 for breakfast good. 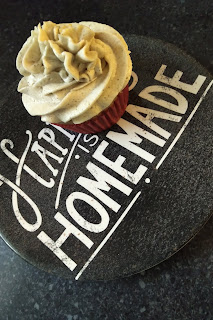 
Cupcakes:
Cream together butter and sugar in the bowl of a stand mixer (or using a hand mixer). Add the eggs, vanilla and apple sauce. Mix until fully incorporated.
Whisk together all of the dry ingredients in a separate bowl. Add the apple cider and the mixture of dry ingredients, alternating between the two, slowly incorporating them into the butter/sugar/egg mixture.
Line standard muffin/cupcake tin with paper or foil liners.
Fill cupcake liners ⅔ full and bake at 350º for 17-19 minutes. Bake until toothpick or skewer inserted into center comes out clean. Let cool completely before frosting.
Frosting:
Whip butter, brown sugar, pie spice, and vanilla together with a mixer until light and fluffy.
Gradually add powdered sugar and mix until incorporated.
Add apple cider until you reach desired consistency (more for thinner frosting).
Transfer to piping bag and frost each cupcake once they have cooled.

Posted by USASillyYaks at 9:20 AM No comments:

Promote Your Page Too